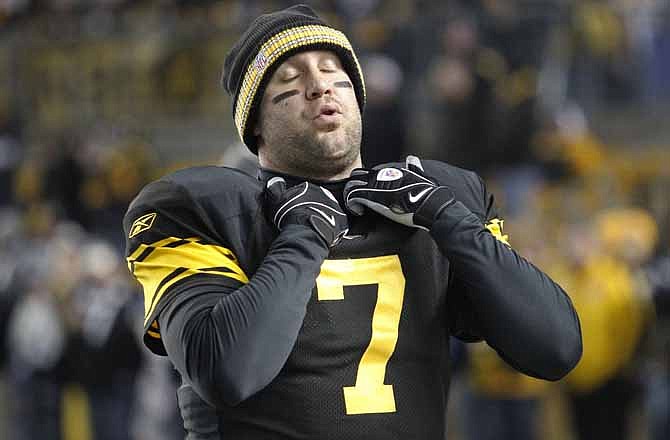 Pittsburgh Steelers quarterback Ben Roethlisberger comes off the field after warmups before an NFL football game between the Cleveland Browns and the Steelers on Thursday, Dec. 8, 2011, in Pittsburgh. Roethlisberger left the game in the second quarter after injuring the ankle, but returned to play in the second half.

PITTSBURGH (AP) - Ben Roethlisberger laid on the Heinz Field turf, convinced his left leg was broken. The Pittsburgh Steelers huddled around their franchise quarterback, concerned their promising season was in jeopardy.

Roethlisberger added to his burgeoning reputation as one of the toughest players in the game by returning from a gruesome second-quarter sack to pass for 280 yards and two scores - including a 79-yard strike to Antonio Brown with 2:52 remaining - to lift the Steelers to a 14-3 victory Thursday night.

"You can't say enough about our quarterback," Brown said. "It's amazing to play with a guy like that who exemplifies that type of toughness."

Not that Roethlisberger felt particularly tough after getting his left leg caught underneath Cleveland's Scott Paxson midway through the second quarter.

"It was one of the most painful things I ever felt," Roethlisberger said. "It felt like the middle of my leg was just, cracked ... it felt like my foot was outside of my leg."

He went to the locker room for X-rays while veteran Charlie Batch tried to fill in. The X-rays showed no break and Roethlisberger returned.

Roethlisberger received a rousing ovation when he walked back onto the field to start the second half, though it was obvious he was in serious pain. He hobbled to the line of scrimmage, he tip-toed while handing the ball off and he grimaced while stepping up to throw.

Yet he somehow completed 8 of 12 passes for 178 yards after the break, including the sealing touchdown to Brown, who caught the ball near midfield then beat Cleveland's Mike Adams to the end zone.

"I'm proud of him and glad he scored because I wouldn't have been able to make it down there if we had to run another play," Roethlisberger said, laughing.

Roethlisberger will have an MRI exam Friday to determine the extent of the damage. The Steelers have 10 days off before a game in San Francisco.

Brown finished with five receptions for 151 yards and a score as the Steelers (10-3) won for the eighth time in their last nine games to move a half-game in front of Baltimore for the AFC North lead.

Yet the night won't be remembered for Brown's spectacular catch-and-run but Roethlisberger's John Wayne impersonation and Cleveland's typical meltdown against its biggest rival.

The Browns (4-9) lost for the 15th time in their last 16 games with the Steelers, though they had plenty of chances to pick up their first victory at Heinz in eight years.

Colt McCoy passed for 209 yards but also threw two interceptions for the Browns (4-9), who lost for the 15th time in their last 16 meetings with the Steelers.

The second-year quarterback was scrambling out of trouble when he tucked the ball under his arm briefly as if to run. He pulled up as Harrison approach and flipped a short pass to Montario Hardesty just before Harrison smashed into him. McCoy laid on the field for several moments before making his way off.

He refused to say whether he felt Harrison's hit was a cheap shot, but acknowledged that "it got me for a minute."

Harrison, who has faced stiff fines in the past for hits against defenseless players, believes he didn't do anything wrong.

"From what I understand, once the quarterback leaves the pocket, he's considered a runner," Harrison said. "All the defenseless(ness) and liberties that a quarterback has in the pocket are gone and you can tackle him just as he's a running back. The hit wasn't late, so I really don't understand why it was called."

Seneca Wallace filled in, leading the Browns to the Pittsburgh 5. McCoy returned but he wasn't the same. He was flagged for intentional grounding on his first play back to push the ball back to the Pittsburgh 16. He tried to hit Mohamed Massaquoi in the end zone on the next snap, but Pittsburgh's William Gay easily stepped in front of it for an interception.

"I just didn't get enough on it, underthrew it and their guy made a nice play and that was basically the game," McCoy said.

Pittsburgh's defense gave a little but did not break, keeping McCoy winless against AFC North opponents in his brief career. He's 0-8 against division rivals, though there was plenty of blame to go around.

"You can look at the raw yardage and say, 'well, I don't know what kind of performance it was,'" Cleveland coach Pat Shurmur said. "But we kept them out of the end zone until that last big pass. There's some things we can build on."

Maybe, but they failed to take advantage on a night when the Steelers had trouble getting out of their own way.

Twice in the first half Pittsburgh turned it over in the red zone. Hines Ward fumbled at the Cleveland 15 early in the second quarter to halt on Pittsburgh drive. The Steelers got it right back on Troy Polamalu's first interception of the season. Polamalu returned the pick to the Cleveland 10.

Following a false start penalty, Roethlisberger hit Heath Miller in the flat, but the ball came tumbling out after getting hit by Cleveland safety Joe Haden to squander another opportunity.

The Browns were hardly better. McCoy appeared to score a touchdown on Cleveland's opening possession, but the score was overturned by replay, which showed McCoy's knee hitting the ground with the ball just short of the goal line.

The Steelers stuffed the Browns on third down and Cleveland settled for Phil Dawson's 20-yard field goal.

Pittsburgh appeared to be off to the races when Roethlisberger hit Jerricho Cotchery for an 11-yard score before injury changed things dramatically. Yet the Steelers survived again behind the play of one of the league's toughest competitors.

Roethlisberger has already played through a sprained left foot and a fractured right thumb this season, though the pain paled in comparison to what he felt in the second half. Still, he managed to survive and keep Pittsburgh's hopes for a division title and homefield advantage through the playoffs very much alive.

"It's one of those things with him where you're literally are going to have to take him off the field on a stretcher to get him out of the play," Batch said.