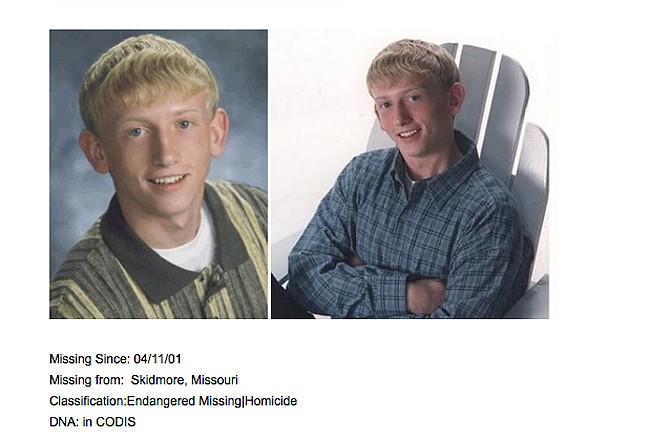 Branson Perry, seen above in photos posted on bransonperry.com, went missing from his home in Skidmore, Mo., 10 years ago. Tips can be left at that website.

SKIDMORE, Mo. (AP) - Friends and relatives of a then-20-year-old northwest Missouri man who disappeared 10 years ago have vowed to keep a promise to his recently deceased mother to find out what happened to him, even though they acknowledge he is likely dead.

On April 11, 2001, 20-year-old Branson Perry left his parents' home in Skidmore and hasn't been seen since. Officials have turned up little evidence in the decade-long search for Perry.

"We haven't received any tips lately, not since last year. Every now and then we'll get something," said Nodaway County Sheriff Darren White, who was a deputy when Perry disappeared.

No one in the town has forgotten Perry. Plans are being made for another search this spring, just like those conducted every year for the last 10 years.

"Around town, we searched every oil well, every outside toilet. We searched everywhere that was possible for us to think that something could be there," said Jo Ann Stinett, his grandmother.

Most people believe that Perry is dead, the St. Joseph News-Press reported Monday. When his mother, Rebecca Klino, died in February, her obituary said she had been preceded in death by her son.

"I think she knew he wasn't alive, but she always wanted to continue to look for him either way," said Monica Caison, founder of the CUE Center for Missing Persons.

Caison said she and other close friends of Klino's promised her they would continue to look for her son.

One suspect in the case was identified in 2003. Authorities believe Jack Wayne Rogers of Fulton bragged in an online chat room that he abducted, raped and murdered a blond-haired man from Skidmore. In the same chat, authorities believe Rogers said police would never find the body because of how he disposed of it in a remote area of the Ozarks. Authorities searched the yard of Rogers' home in Fulton in November of 2003 for possible buried evidence.

Rogers was charged separately with child pornography and sentenced to 30 years in federal prison. However, he has never been charged in connection with Perry's disappearance.

Sgt. Roger Phillips, an investigator for the drug and crime control division of the Missouri State Highway Patrol and a friend of Klino, is committed to finding answers.

"Just because (Ms. Klino) is not here doesn't mean this train is not going to keep moving," Phillips said. "It's about getting to the truth."