Landmark is 'definitive of the penitentiary' 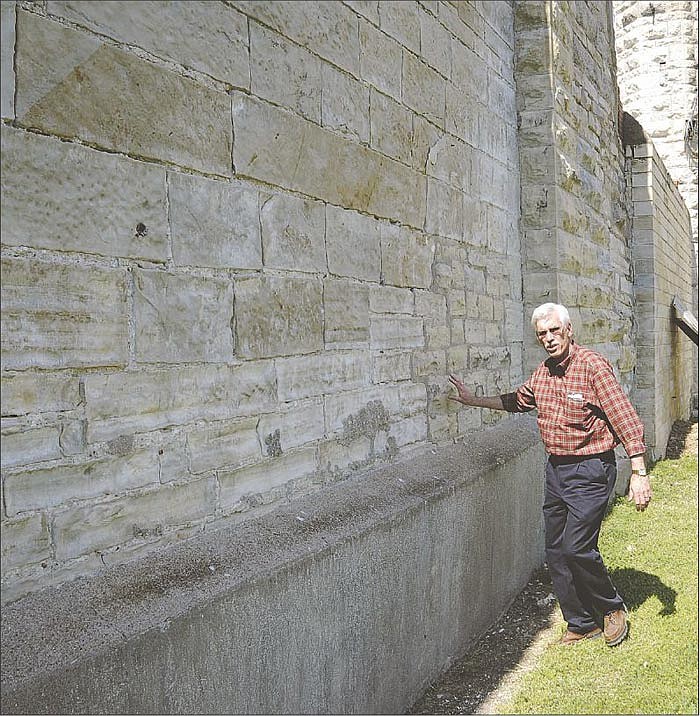 Charlie Brzuchalski points out one of the oldest sections of the walls at the Missouri State Penitentiary.

Many a prison officer sat alone and without distraction for long shifts in the towers at the Missouri State Penitentiary.

"The Walls," as the MSP was commonly known, are a city Landmark and perhaps the most distinctive characteristic of the site.

"The wall is definitive of the penitentiary," said historian and former deputy warden Mark Schreiber.

Although corrections officers rarely looked forward to working lonely shifts in the towers, security was essential.

Sitting on a high seat with weapons behind him, a tower officer wasn't allowed a book, radio or other distraction because he was supposed to be alert at all times.

"The tower officer's job was very critical, but very boring," Schreiber said. "It was the first post you had to fill. They were responsible to secure the perimeter for public safety."

Tower 2, at the corner of Lafayette Street and Capitol Avenue, could be restored to its turret-style prior to the 1954 riots, Schreiber said.

The turret design was part of the Auburn correctional philosophy designed to be imposing and foreboding to inmates, Schreiber said.

"It made a strong statement of the state's control and power over them," Schreiber said. "The wall meant permanence and containment - "you belong to us.'"

After the 1954 riots, the turrets gradually were removed because they were small and had poor site lines. Officers had to walk out on catwalks for better vantage point. An officer was killed by a lightning strike in the 1920s.

Just to get inside the turret was a unique feat, Schreiber said. The replacement officer had to be positively identified by the existing officer. Then a key was lowered on a string to the replacement to unlock the door.

Then he had to climb a roundpipe ladder at a 90-degree angle, carrying his lunchbox and anything else with him.

"That was pretty hard to do," Schreiber said.

But then the man on the ladder had to push open a heavy door in the tower floor to enter. People fell, the door hit people on the head and there was even a suicide on a tower where an officer fell over the hatch door and a fire department ladder had to be used to remove the individual, Schreiber recounted.

The walls tell the prison's story.

Even the portion of the wall along Capitol Avenue that collapsed in 2002 marks history, indicating the time had come for the inmates to be relocated to the Jefferson City Correctional Center.

Based on archaeological information, the oldest stillstanding part of the wall extends from State Street along Lafayette Street to Capitol Avenue, said Charlie Brzuchalski, senior project manager with the Office of Administration's Design and Construction. It replaced the wooden stockades built with the original 1836, 250-bed housing unit.

Brzuchalski has been researching dated postcards and Sanborn maps to develop the most accurate record of where the wall and razed buildings through time were.

The oldest remnants of the wall run the line between the upper and lower recreation yards, near the quarry and gas chamber, Schreiber said.

"It's a mish-mash of stuff that's been done over the years," Brzuchalski said.

The stone used for the walls and several of the older interior buildings was quarried by inmates inside the prison or at other locations operated by the prison. Other possible quarry sites include at the corner of Chestnut and Dunklin streets on the Lincoln University campus, behind the Jefferson City Animal Shelter on Miller Street, on Bald Hill Road near the Girl Scout camp, on Elm Street where the Missouri Highway Patrol headquarters is, and at McClung Park, which was built with inmate labor.

The river side wall has seen as many as four additions to the stone wall. Speculation says that headstones from a former graveyard and reused stone from demolished buildings was reused to heighten the wall.

Broken glass and sharp rocks were used to cover the top of the walls, so that when escapees would climb to the top or try to tunnel through, the jagged pieces would fall down on top of them.

"Community members identify most with the wall," Schreiber said. "People are curious. Even after taking the (Jefferson City Convention and Visitors Bureau's Hard Hat) tours inside, I still think they see that as the one defining factor of what the MSP was."

As redevelopment of the MSP proceeds, some openings will be required for vehicular and pedestrian access.

"Care must be taken to retain the walls as a key historic feature to the site," the MSP Master Plan says. And corners are earmarked for preservation for boundary interpretation.

The current MSP redevelopment plan targets removal of the walls along the Missouri River and Chestnut Street. However, towers would remain to mark the perimeter.

At the corner of Chestnut Street and the north side, Tower 10 is unusual, with the spiral, stone staircase inside, Schreiber said.

And the most historic section of the walls would be from Housing Unit 1 at State Street along Lafayette Street and around the corner at Capitol Avenue to about where Cherry Street is on the outside, Schreiber said.

"I consider the wall as important as the Executive Mansion or the Capitol in relation to the development of Jefferson City," Schreiber said.