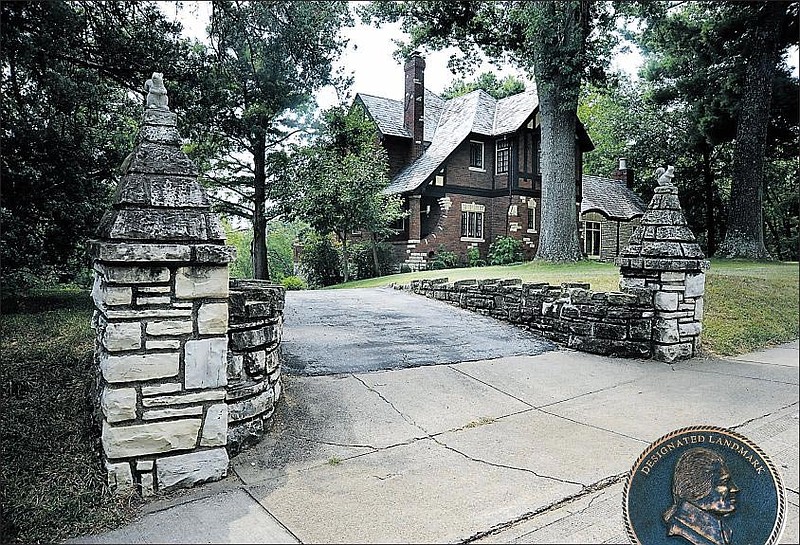 The original pillars that form the driveway entrance still stand nearly 80 years after the home at 1005 Adams St. was built.

Only two owners have lived in the Classic English Tudor-style home at 1005 Adams Street.

The first occupant, Alfred Hawkins built the home about 1930 for his wife, who had original plans from her birth home in England.

An influential figure in Jefferson City's business community, Hawkins took over the state printing contract from Hugh Stephens. This home, on a two-acre lot, had a grand backyard well-known as the site for elaborate lawn parties.

"We fell in love with it the first time we saw it," Roberta said. That was 42 years ago and the couple reared their two boys there, only blocks from Thorpe Gordon Elementary and Jefferson City High schools.

The home was a perfect setting for their bar mitzvahs. And the basement created a perfect "band room" for teenagers and a "scout" room before that for den meetings.

The Hawkins-Herman Home received the City Landmark award in May from the Historic Preservation Commission.

Much of the information Roberta knows of the Hawkins came from Mrs. Fowler, who lived with and worked for the first owners in their final years. "She had wonderful stories of their travels," Roberta said. Mr. Hawkins' initials remained on the front door, as the monogram didn't change for the second owner. When the Hermans bought the home 42 years ago, they made a point of buying back several of the Hawkins' original furniture, too.

A breakfast room off the kitchen features French doors leading to an enclosed breakfast porch. When the Hawkins lived there with servants, it probably would have been lovely, Roberta said.

About the only remodeling the Hermans have made in these many decades was in the kitchen. Early on, they removed a large walk-in, butler's pantry to create a larger kitchen space. And then their pride and joy is the flooring, made of long-leaf yellow pine from the St. Louis 1904 World's Fair - a fascination for Robert.

A smoker's room off the great hallway opposite the dining room was the quintessential escape for men after dinner, complete with a closet bar, during the Hawkins' entertaining days. Today, it houses many of Robert's World's Fair memorabilia.

Mrs. Hawkins entertained the ladies in the living room with a marble fireplace as the focal point and an arched ceiling.

Roberta added a baby grand piano and remembers many a family gathering around a roaring fire.

The hall, which draws all the main floor rooms together, captures visitors' attention, Roberta said. It has the feel of an English castle with plaster scored and antiques to look like stone. They have preserved the wood and stencil accents, too.

"If we get any credit, it's that we've tried to keep it up," Roberta said.