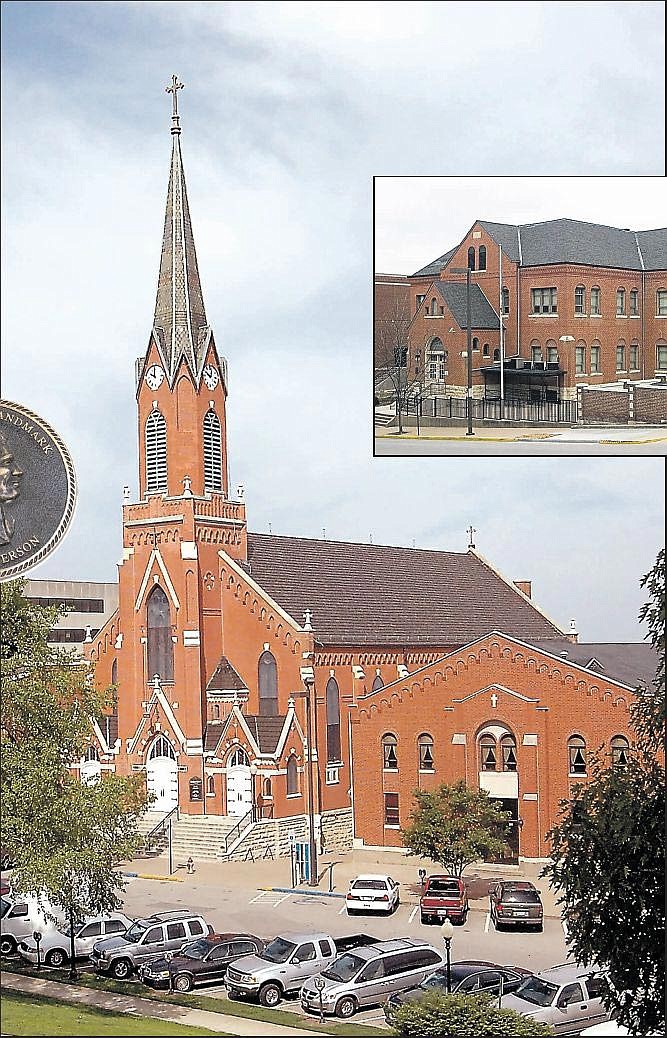 Its iconic steeple is captured in almost every painting or photo taken of the Capitolscape.

St. Peter parish, though not the oldest church in Jefferson City, has become an historic pillar of the downtown.

The first recorded Catholic Mass in Jefferson City, celebrated by Father Felix Verreydt, was held in 1831 at the home of Bernard Upschulte, then located at the corner of High and Mulberry streets.

By 1838, fewer than 10 homes were registered Catholic families inside Jefferson City. Nevertheless, Father Ferdinand Helias, who was pastor at Westphalia, celebrated Mass in private homes. Later, St. Peter Parish Church held its first meetings at the old state Capitol building, where the Governor's Mansion is today.

The church attempted to purchase the building, but the House of Representatives voted it down.

The first permanent church for the parish was constructed in 1846 of local oak. The Jesuits turned over care of the new mission in 1846, making it the 59th parish in the St. Louis Diocese.

A year earlier, the parish founded St. Peter School, which saw its first building in 1854. Before that, a parishioner offered free parochial classes in his home.

A second church, built at the corner of Broadway and High Street, was dedicated in 1856 to serve 40 families. The Jefferson Inquirer declared it "the handsomest building in the city." It was razed in 1881 for the present building.

The current gothic-style building was constructed in 1883 by local builder Fred Binder to seat 700.

The clocktower, installed in 1888, rises to 170 feet and contains four bells dedicated to St. Peter, St. Joseph, The Sacred Heart of Jesus and The Blessed Virgin Mary. The third and present school was finished in 1890 by local architect Frank Miller, following rapid growth for both the parish and community. The basement included a bowling alley. After the 1911 Capitol fire, the House of Representatives conducted business in the school library and committee meetings in classrooms, while school students met for classes in private homes. Noted orator and political leader William Jennings Bryan addressed the Joint Legislative Assembly in St. Peter's Hall. St. Peter Church served as cathedral for the Diocese of Jefferson City from 1956 to1968. St. Peter High School was started in 1931 and served until 1955, when Helias Interparish High School opened. A two-year school began in 1917. And in 1964, the Vogelweid Learning Center opened. The church and school are listed on the National Register of Historic Places and have been designated as city Landmarks. Church leadership has been involved in several community ventures, including founding the Carmelite Monastery, supporting the St. Joseph's Home for the Aged, establishing the city-wide Veteran's Day Mass and establishing St. Marys Hospital here in 1905.

In its 170-year history, the parish has grown from fewer than 10 homes to about 5,500 parishioners. And it has expanded from a log-frame beginning to a five-building complex.

Information for this story provided at stpeterjc.org.

After the state Capitol burned in 1911, the House of Representatives held its sessions in the St. Peter School library.