Houchins House is another of the city's designated Landmarks 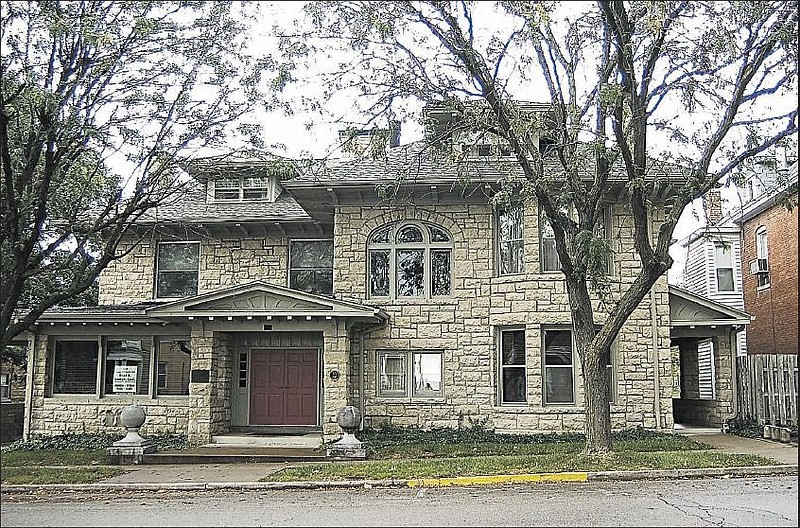 The Houchins House at 611 E. Capitol Ave. is a city-designated Landmark.

Before rehabilitating Capitol Avenue really took hold, Jim and Betty Weber took advantage of their 20-something energy and bought 611 E. Capitol Ave. as a fixer-upper.

"We were young and foolish and thought we could conquer the world," Betty said.

In 1970, it still had the lingering reminders of its most recent use as a nursing home. But behind all that, Jim could see the "diamond in the rough."

Betty said, "Oh my goodness, you really like a challenge." After replacing all the infrastructure, they started finishing the third floor as their residence. That was after they put the project on hold while Jim served in the U.S. Army after being drafted. It was 7,500 square feet and a lot of house, the Webers recalled. But eight years later, they were living on the third floor - originally the white servants' quarters, and they were renting commercial space in the other three levels. So of the renters stayed with them for the next 30 years. "We started at the top and worked our way down, so we had a place to live," Betty said. The couple tried to do most of the work themselves. Betty even worked through her pregnancy. "It was quite an experience," she said. The Webers maintained as best they could the original woodwork, fireplaces, arched doorways and columns. Unfortunately, they do not know what became of the original front door.

"We're happy the building has been preserved," Betty said. "The neighborhood will probably never be the "silk stocking district' again. But property value should go up with the prison redevelopment."

In the last few years, other once prominent residences along that row have been converted and renovated for commercial use. "It's inspiring to see others take pride in that East Capitol Avenue and the eastside," Betty said. Jim agreed he would like to see the area continue to evolve with a city overlay district and aesthetic lighting for safety. Once she owned the impressive property, Betty began to wonder about its history. "I wanted to know something about this house," she said.

So her research took her among other places to the Cole County Historical Society, where she learned the second owner - Myrene Houchin Hobbs - also founded the historical society.

Hobbs was the daughter of James Albert and Mollie Clark Houchin, who were successful and generous, Betty said. They entertained governors and legislators and their families, and even hosted an annual Christmas party for as many as 700 of the city's needy children.

The debut ball for their only daughter Myrene on June 30, 1919, the eve of the national prohibition, was the largest of all their affairs. A 50-foot pavilion was built in the garden for a midnight dinner and fireworks were set off from a lower terrace.

"So great was the jam of on-lookers who assembled to view the ball outside the wall that the police were kept busy clearing a lane for traffic on Capitol Avenue," the News Tribune reported in 1944 at the time of the home's sale.

The wait staff often were organized by entrepreneur Duke Diggs, for whom the Community Center on Dunklin Street is named. And local band leader Freddie Williams often provided the musical entertainment.

A 1944 News Tribune account said "musicians played from behind the palms in the front parlor with its glittering gold leaf furniture."

To build the home, a ravine was filled with 50,000-truckloads of cinders and dirt. The Houchin bought all the property west to Marshall Street, removing two residences and a four-flat.

But the opulence of the stone home built by prison labor on "silk stocking street" faded after Houchin's business, Star Clothing Manufacturing Company, went into receivership in the early 1920s.

Bella Vista apartments replaced the massive and elegant gardens designed by Shaw's Gardens of St. Louis. And the Houchin Driving Park at 701 Clark Ave., which operated about 20 years beginning about 1908, eventually became Bird Haven subdivision in the 1930s.

Houchin' Astral King won first-place at the Missouri State Fair at age three and Houchin was elected to the first two-year term as president of the Missouri Saddle Breeders Association, formed in Jefferson City in 1912.

Houchin also was a strong Democratic supporter, serving as statewide coordinator for the successful election of Joseph Folk as governor in 1904. And he ran himself for governor in 1912 and 1916.

Jim and Betty Weber have had a decades-long, residential connection to the Houchin-Hobbs family. When they moved out of the third floor of the Capitol Avenue home, they moved into the home once owned by Jack and Myrene Hobbs. And they continue to live in the subdivision he developed near the Capital Mall.

As for the home on Capitol Avenue, they are still fond of it and maintain it regularly.

"It had the amazing opulence of the eras," Betty said.