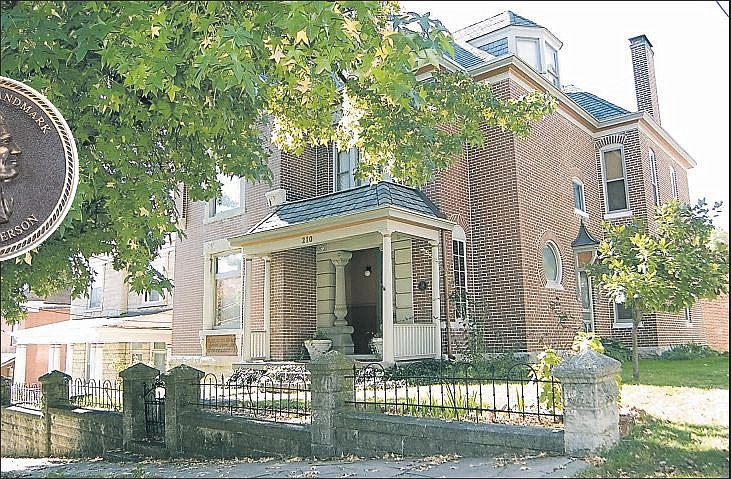 Hidden behind mature shade trees, the unique architecture of 210 Lafayette St. might go unnoticed to the hurried commuter or occasional visitor.

But the original stone retaining wall with a miniature wrought-iron fence introduces more observant passers-by to a grand home in the same vein as its Capitol Avenue neighbors.

The Asel Home was built by a local butcher for his family, who had lived for years above his business in the 100 block of East High Street. But they moved in in 1898 to a decorative and well-thought-out home.

The Queen Anne-style home's interior features - such as a warming cabinet on the radiator, a parlor fireplace with oak mantel and a fine foyer complete with a curved corner and impressive wood stairway - have remained intact through nine owners.

In 1993, Toni Prawl and her husband, Dennis Ceglenski, bought the home, which was awarded the city's Landmark designation in 2000. The home also was included in the Capitol Avenue Historic District listed on the National Register of Historic Places.

A crane carved into the limestone above the second floor triple windows encouraged Prawl and previous owners to make the modest room off of the master bedroom into a nursery.

Prawl and Ceglenski's children - Julia, 12, and Jacob, 8 - today enjoy rooms of their own down the hallways with the wood-design trim still in its original condition.

The family has the option of two stairways to negotiate the stately home.

The carriage house, built two years after the home, is one of Prawl's favorite features. When shopping for a new car recently, she made it a priority to find a car that would park inside, she said. Prawl has tried to maintain the original character of the home while also converting it to the needs of a modern family. "We were mostly drawn to the house because of the architecture," Prawl said. "It's a gem. "Such purpose, craftsmanship and skill went into this." The home has many distinguishing features that are tell-tale to an original owner who was intent on fulfilling a long-held dream to own his own home. "If I saved money all my life to build a house, I think I would put a lot of time into selecting features for it," Prawl said. Henry and Theresa Asel were second- and first-generation German immigrants. Their three children were ages 15, 13, and 10 when they moved into this home. And within two years, they were mortgage free.

The children continued to live in the home until 1939. After that the home was briefly converted to a duplex and saw ownership from a state senator and local historian Gary Kremer.

"I'm curious about its history," said Prawl. "I'd love to know more about the (other) owners."

The front gable is decorated by a starburst and comet. And several textures and colors, terra cotta carvings and vergeboard on the gable in the exterior make the home quite eclectic, Prawl said.

Although Prawl does not have a name for the architect, she has her suspicions that the Central United Church of Christ's parsonage on Ashley Street was built by the same person.

The Prawl-Ceglenski family also benefits from the downtown location's convenient access to community activities and church and school. Just as the previous owners probably took advantage of the pedestrian-friendly neighborhood near Whaley's and other eastside businesses.

"This is not a low-maintenance pursuit," though, Prawl noted. "But this represents a place in time. That's what I like about historic buildings.

Another reason for owning an older home is to "practice what she preaches" as an historic preservation specialist for a state agency, she said.

"I always thought I'd own an old house. This ended up being my dream home."