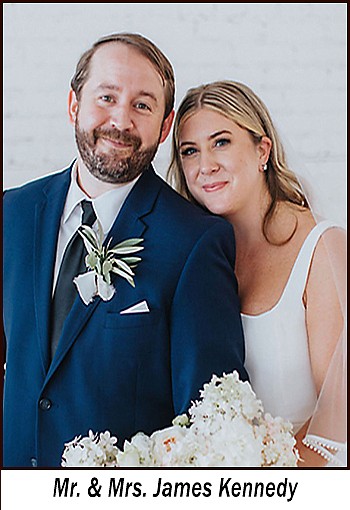 Liz Martens and James Kennedy, both of Nashville, Tenn., were married at 5 p.m., August 5, at Gordon Green, Cleveland, Ohio. Molly Kent performed the double-ring ceremony.
The bride is the daughter of David Martens Jr. and Kelly Martens, Cleveland, Ohio.
The groom is the son of Becky Kennedy, Jefferson City, and the late Patrick Kennedy.
The bride was given in marriage by her father.
The honor attendant was Molly Martens, Cleveland, Ohio, sister of the bride. The attendants were Kerry Schlater, Milwaukee, Wis., sister of the bride, and Connor Martens, Cleveland, Ohio, brother of the bride.
The best man was Chris Delaney, Chicago, Ill., best friend of the groom. The groomsmen were Mike Johnson, Chicago, Ill., and Mitch Scheperle, St. Louis, friends of the groom.
The flower girl was Jane Schlater, daughter of Kerry and Andy Schlater, Milwaukee, Wis., niece of the bride.
The guitarist was Harry Burson, Oakland, Calif., friend of the groom.
A dinner and dance reception followed the ceremony at Gordon Green.
A rehearsal dinner, hosted by the groom's mother, was held on August 4 at Great Lakes Brewing Co., Cleveland, Ohio.
The bride is a 2008 graduate of Magnificat High School, Cleveland, Ohio, and a 2012 graduate of the University of Dayton, Dayton, Ohio, with a major in English and Spanish, and minor in Film Studies. She is Artist Royalty Coordinator at Me Gusta Music, Nashville, Tenn.
The groom is a 2004 graduate of Helias High School, Jefferson City, and attended Missouri State University, Springfield. He is a Trust and Safety Associate at Eventbrite, Nashville, Tenn.
After a wedding trip to Puerto Rico, the couple resides in Nashville, soon to be moving to Pittsburgh, Pa.