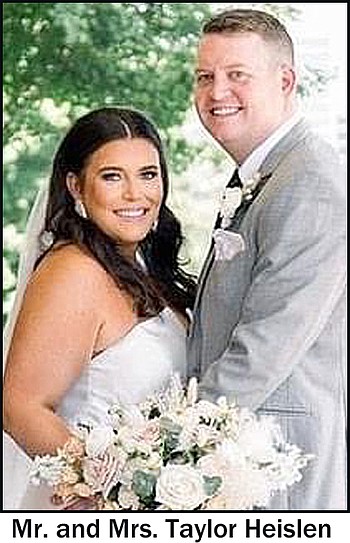 Jessie Cutburth and Taylor Heislen, both of Lee's Summit, were married June 3 at Our Lady of Sorrows, Kansas City. Fr. Stephen Jones perfored the double-ring ceremony. The bride is the daughter of Jim and Cherra Osborn, Lee's Summit, and Sean and Annamarie Cutburth, Fort Lauderdale, Fla. The groom is the son of Kevin and Jan Heislen, Jefferson City. A dinner and dance reception followed the ceremony at 28 Event Space, Kansas City. A rehearsal dinner, hosted by the groom's parents, was held June 2 at Boulevard Brewing Company, Muehlebach Suite. The bride is a 2010 graduate of Blue Springs South High School, Blue Springs, and a 2014 graduate of the University of Missouri-Columbia with a BS in Health Sciences. She is an Implementation Specialist for Worldwide Express. The groom is a 2010 graduate of Helias Catholic High School, Jefferson City; a 2015 graduate of Lincoln University, Jefferson City, with a BS in Business Education; and a 2018 graduate of William Woods University, Fulton, with a MBA degree. He is a Treasury Management Analyst for NBH Bank. After a wedding trip to Punta Cana, Dominican Republic, the couple resides in Lee's Summit.